Here’s the first official pages of my new manga, “Witch-Like Wonders,” just in time for Halloween! I’ve been working on all the writing, and this is the artist (whom I want to credit properly, but I understand that they’re busy.) 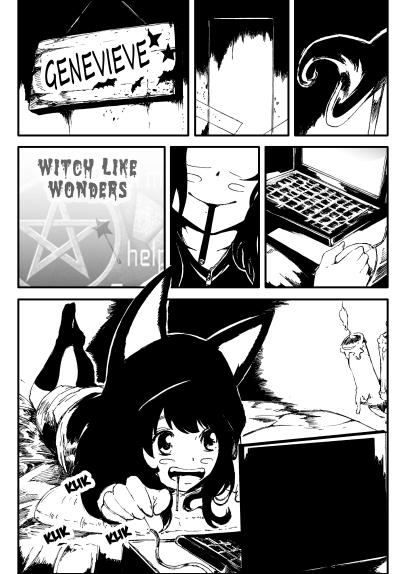 Or, for those of you that like it in writing rather than comic, I also have that.

Day one. Day one was always the hardest. But Genevieve couldn’t allow it to deter her. Building a website was easy. It was putting the words down in a blog header that was going to be befuddling.

But it was necessary. As a resident witch, it was her duty to lure customers into her ever-growing web of wonders. The more people that she attracted, the sooner that those binding laws about magic brushing against the shoulders of humanity would become a remnant of the past.

She was still a teenager, and though she resented computers and technology, unlike her kid brother, making a fanbase was an easy lure to cast out.

“What should I even write about?” she asked herself over and over, leaning back in her chair, spinning around a few times, and eventually tumbling out onto the floor before returning to her spot, thankful that her mother’s charms were ineffective in keeping an eye out for her.

Maybe she could just write about her day. It was simple enough.

She shut her eyes as she hit ‘publish,’ but once it was out in the world, she kept her eyes glued on the webpage, refreshed it twice, and then decided to get up to have a snack. Fifteen minutes later, she planted herself in her chair, pulled her hood over her head, fiddled with the fuzzy cat-ears, and her eyes snapped open at the sight of her first comment. When she decided to curiously read it over, she didn’t expect brutal criticism.

“You a newbie? I can tell you’re desperate. You’ve got a lot to learn about blogging if you’re aiming big.”

Genevieve felt her nerves frazzle, and she considered replying until she saw an instant message bar pop up to the right of the screen. She eyed the username—Lich^Tear—and decided to give the peanut gallery one more test run.

“I can show you the ropes if you want.”

Genevieve smirked. Lich^Tear may have been a critic, but she had a goal to rope them in as her first foray into witch-like wonder.

Like what you read/saw? 😀 If you’d like to see more, I’d greatly appreciate any support towards the formation of this project! I plan to get pages done for every drabble that I manage to complete, and hopefully one day this will be a completed one-shot! My goal is to publish it as an actual book.

I also have a PayPal donation page for getting more pages created! Every dollar helps bring this fun little story to life!