One good thing about being an author is looking forward to all of the cons that you can participate in! There are endless possibilities just waiting to be unlocked with your pass-key. Or badge. Whatever you’d like to call it.

This week in particular, I spent my time prepping for one of my favorite local cons, ICON, where sci-fi and fantasy spring to life! I’ll see how far I can go with the sequence of events here!

For the last month or so, I’ve spent time not only prepping my book work, but also practicing my acting chops. I’ve never been on stage before, but being an ambivert can sometimes have its quirks: I decided to participate in the opening ceremonies stage production, Volcanocalypse!

It was wickedly entertaining to join everyone up on stage, many laughs and jokes were shared both in rehearsals and even during the performance itself. I made so many amazing friends during that time span. It was an experience that I’ll never forget and hope that I’ll be able to participate in again!

In addition to working in the theater, I’ve also been spending time polishing up my first completed series, “The Final Lesson” for a proper release, and so far, reception has been pretty great! It’s surprising to see how few people know what a duology truly is.

To think, so much has developed in the last few months, and I finally got to debut them!

I’m no stranger to any conventions, as I’ve participated in them as a goer since 2012, but became an actual panelist in 2017. But one thing is definitely the same for most: they can be truly eventful. 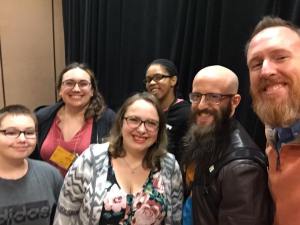 It began with an opportunity to discuss with much younger writing students during the Torchlit Study workshop. Unfortunately, only two students showed up, but it didn’t deter any of us. The participating authors discussed all that we could with the students about any questions, concerns, and advice that we could offer. I think that it worked out incredibly, and I hope that those kids got a lot of insight into shaping their careers from this point on.

Throughout the time of the convention, I got to encounter a lot of new faces on panels and inside of the dealer’s room, where conversation and antics ensued. I find it amusing to interact with new people–it gives you a fruitful insight into their background based on the way that they come off towards you. Intrigue carries, truly.

Not only that, but the topics were fun to build on! There was an anime panel that I got to moderate (though, that mainly turned into a discussion on a variety of anime), some discussions on sci-fi/fantasy shows that should be watched, and even a reading, where I really got to allow “The Final Lesson” to shine. It’s amazing to see hope and interest in someone’s eyes. That has always been my goal as an author, to inspire someone else to create, or to learn something new about how to reach that goal.

That’s always the fruits of my labor: seeing someone grow while I’m doing the same.

As far as book sales went, they were pretty successful! I left with about three of each book left (technically five each for “The Final Lesson” and “The Sage’s Reign,” but they’re to be sent off to others), which is the most that I’ve ever sold/traded at a con in my career, since I started with about ten each for my duology and six each for “The One Left Behind: Magic” and “‘First Words: Final Lesson.” I feel really accomplished to have walked out with something in the end.

Cons can be frustrating at time when you run on nothing, so definitely be sure to recharge, whether it’s by sitting down and easing up, or going to find food! You’re gonna need it, and it’s a con-tip 101!

And remember, enjoy yourself no matter what con you pop up in!

In honor of a sweet little anthology book that I get the chance to have my name printed on (that’s free for about three more hours!), I offer an excerpt from the book, “Rainy Days and Mondays!” Anthology Planted Here!

“Rainy days and Mondays are the best kind of play-days.”

Seven-year-old Allison watched the thunderclouds roll in from the eastern border as she gazed longingly out of her bedroom window, her fingertips clinging to the adorned yellow curtains that were pushed open with the hopes of sunlight rushing through on this summer morning. She watched her father rush out into the driveway in a spick-and-span coat and tie combo with an umbrella over his head, looking up to the window and waving with a bright smile on his face to her. Allison was beaming as she waved back to him, watching his car roll into the street before disappearing from her sight.

The start of a new week, and she was spending it inside. She wanted to run outside and jump in the puddles, but her mother always told her that cleaning up the mess was too much of a hassle due to the constant pitfalls and her young daughter’s rambunctious and carefree antics running wild. After a while, Allison decided to find new ways to enjoy her summer. It was mid-July, and school wouldn’t be starting back for another few weeks. She had to make the most of things.

So, she settled with working through her imagination instead.

She threw open her closet doors and scrambled through some toy bins until she uncovered a ‘magic wand’ made entirely of cardboard and ribbons. Scrappy due to its wear over the year since she’d made it in art class, but it was where her heart would venture today. She stood up after tossing the makeshift wand onto her bed and grabbed her favorite red and white polka-dotted dress. Much like the wand, it had seen far better days, some buttons beginning to unravel from the top layer while the petticoat was ripping at the seams, but she was certain that the dress would hold for just a few more sunny days in school.

She tied her shoulder-length blonde hair into a ponytail with a red ribbon, put on some white stockings to keep from showing too much skin—it was unladylike—and her red open-toed dress shoes, tapping them against the floor to make sure that they still had a comfortable fit.

Once she was satisfied, she picked up her wand, took in a deep breath, and spun in a rather graceful two-turned pirouette before outstretching her arm for a proper finish.

“I am the keeper of sunlight, Pettibeam!” she chimed, holding up her wand. “And I am here to stop the rain from wrecking your parade!”

She shut her eyes and incanted a silent spell that no mere mortal could dare listen to with their own ears. She watched the stars in her eyes captivate the skies of her free-flowing heart, listened to the rays of the sun beginning to beam down into her wand, which slowly transformed it into a proper wood-crafted weapon, worthy of a sweet witch meant to carry happiness to those that needed a brighter day.