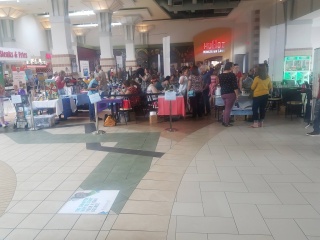 I’m going to tell you a little story. August 5th, 2012 holds a lot of significance in my life; it was the day that my mother suddenly passed away. I was eighteen years old, a week and a half away from starting college, and it was the moment that my life changed forever.

My mother was the one that raised me, mostly on her own as a single mother, but she had help from others to push me down the right path. Not to say I was a bad kid, nothing of the sort, actually. She primed my love of literature from a young age, and was an avid reader herself. I don’t think that I would have become a writer without her guidance.

But this year, August 5th was a day not of sadness, but of opportunity. 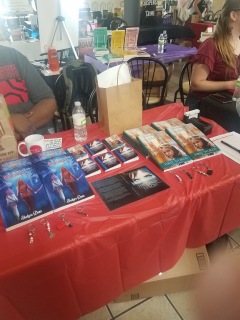 I got the chance to participate in a local author event called “Imagine Other Worlds: IOWA.” I don’t get to attend many events due to my rather annoying night shift schedule, so this one was a dark horse for me.

I wasn’t sure how I would fare, as I’m probably one of the new kids still in the industry despite having been published for a year now, and still rather young and inexperienced. But from the start, I was always prepared to learn more, experiment, and see what I could change about my style. And I wasn’t at all disappointed.

The hardest thing about attending any sort of convention, large or local, is trying to make yourself stand out, especially if there are multiple other authors in your genre. And I’m still struggling a lot to pitch my work to others, because telling a story aloud can be a hassle, even if you’re experienced. But you learn on the go.

Here’s what I took from it:

1. Don’t be afraid to start up a conversation, even if it’s something completely unrelated to your books. This is something that I took from my fellow YA author Jed Quinn. He stated to me after I asked for some advice on how to attract people to you that you should talk to anyone that passes by your booth, strike up a conversation, even if it’s just complimenting them. He joked around saying that someone was wearing a Packers jersey, and he hated that team, but if it leaves a mark, then you’re sold in at least one way. Even if they don’t buy your book, you leave an imprint on them. 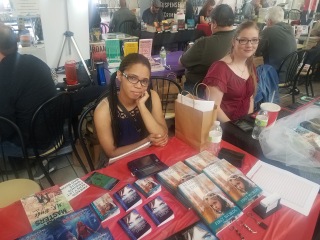 2. You can make allies at your events. I made a great new friend in Cassandra Denhartog, sitting right next to me in the YA area! She’s really sweet, and she’s got skills beyond the border! I think that chance encounter won me more than just some nice conversation, which is always a good thing.

3. Showcase yourself. Being yourself is one of the best things you can be at an event. If you appeal to the right person, you can win yourself some new readers. Personally, I can be rather reserved. But I’m also pretty open and blunt, and Jed actually called me tenacious at a point because I managed to convince him to buy my book. At first, hearing that made me a little nervous, but he reassured me that it’s a good thing TO be tenacious in the writing industry, because it shows that you’re passionate and willing to push past your barriers.

In the end, I sold four copies of my novella, which got me a little hype towards my future project, “The Final Lesson,” but the sales weren’t what I thought would help to define me.

My purpose was to build myself a little more, to learn more about what I could do to not only improve my sales, but uncover the depths of what potentials are running within me. I want to be able to travel to other states, promote myself at conventions away from my norm, but to do that, I must first be prepared by starting local.

Imagine Other Worlds was my first real jump into what I think could be the start of something greater, and for this moment, I’m thankful to the coordinators Terri and Dana for giving me the chance to let the *semi* new kid join the fun!

Allow me to introduce my latest release! The e-book is only $.99, and it’s a great introduction into the upcoming novel! You can purchase it here!