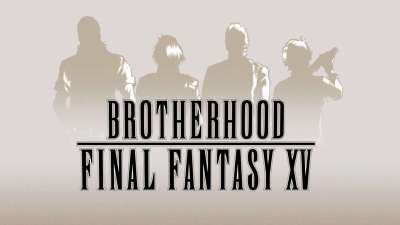 Now, I’m going to say this first: I am a massive fan of the Final Fantasy series, and followed this game in particular from the time that it was in its Versus XIII stage. When Final Fantasy XV was first given a release date back on March 30th (even if it did delay. Fricking Square Enix), this anime adaption was announced as well, and I knew that I had to watch it.
I may be a Final Fantasy fan, but that doesn’t mean I’m gonna go easy on this anime. 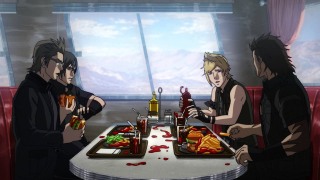 Feel free to blast “Stand By Me” by Florence + The Machine as you read this one. Because that’s what I’m doing, and it pleases me.

There really is no plot-heavy emphasis for the anime–it is the story of four young men traveling to the realm of Altissia in order to meet with Princess Lunafreya in order for Prince Noctis Lucis Caelum to marry her and bind their kingdoms together.

Brotherhood is a prequel to the game and can be watched as a standalone since the game hasn’t been released yet, and it does not have to tie in to the Kingsglaive movie either. Its purpose is to serve as a defining statement on how these four characters met and how they came on this journey together. In other words, character development is the strong point of this mini-series. Each episode is only about 10-20 minutes long, so it can be finished relatively fast, but I watched as the episodes premiered until I finished up.

(For the characters, I will not be focusing on anything relating to the main plot of XV nor anything that could be drawn too far towards it.) 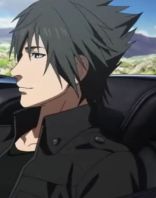 Noctis: I’ll start with our princely lead, Noctis Lucis Caelum. Sole heir to the kingdom of Lucis and weaponsmith of the conjuring breed, he is on a journey with his three friends Prompto, Gladiolus and Ignis to venture to the realm of Altissia, seeking union with his childhood friend and betrothed, Lunafreya Nox Fleuret. After war plagues his life, he is sent away by his father Regis for safekeeping, a fact unknown to Noctis himself until long into his travels.

Noctis himself is actually a character that was unexpected to me. I normally take princes in stride when I watch anime or play video games, or hell, even in books, because they feel cut from similar cloths: happy, cheerful, gentle, mellow and naive… that kind of thing. Or they’re the complete opposite of rebellious, angry, snappy. 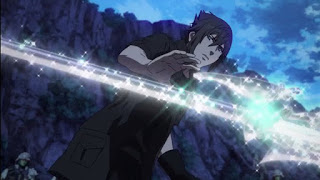 But then there’s Noctis, who feels like a combination of both traits. He’s calm and naive, but at the same time, he loves to have fun playing at the arcade with his friends, taking photos, generally being silly. He’s not above having fun, and when you put him next to brooding Final Fantasy main characters like Cloud, Lightning or Squall, he seems like a breath of fresh air as a main character. I feel like there’s more to his personality that has yet to be uncovered.

As far as his story episode(s) go in Brotherhood, we get insight into the past that he had. But as it’s a spoiler to the main story of Final Fantasy XV, I’m going to keep it concealed! …Unless he decides to sleep through his own past. As much as he loves to sleep, it wouldn’t surprise me if he did. 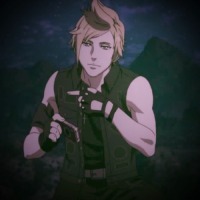 Prompto: Right hand man and best friend to our prince steps in Prompto Argentum, gunner and general kickstarter of all things fun!
When I first heard of XV, Prompto’s demeanor was the one that held the most interest for me. He seemed to be silly in the trailers, pretty crazy at times, and a brilliant contrast to Noctis in terms of his playful banter. I still feel as though he is one of the best characters of the group because of how positive he tends to be. He’s the one that you see having the most fun of the four. While people are working on getting camping materials together, he’s taking pictures. Whenever Ignis allows him, he’s driving the Regalia (yep, that’s the name of the Batmobile-like car) down the sunny roads or is right in the passenger’s seat complimenting all of the sights along the way. 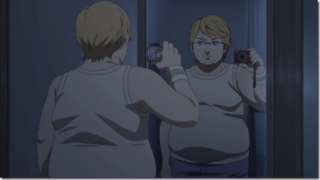 Jumping right into Prompto’s story of how he met Noctis… they actually attended school together. Yep, you heard it here first: a prince that actually attends a public school. But that’s not the twist here. You see that lanky guy up there in the photo, right? Well, try to picture him a little more… plumpy. And let’s call him Plumpto. Because it’s cute.
Quite a contrast, right? But there’s some serious admiration behind this story.

(SPOILERS AHOY!) Prompto is actually an orphan living alone in his home that uses whatever money he earns to order out because, well, he can’t cook. He’s only about twelve here, and is pretty much alone at the start of his saga. Then he befriends a dog, and when he returns it, he is asked to become friends with Noctis through Princess Lunafreya due to his lingering solitude. It was her dog he kept safe!

This spark between them ignites the flame in Prompto to push himself to want to talk to Noctis, but after attempting once, he finds that his weight kills his confidence. So he works hard every day, cuts down his diet, runs outside even through the rain, all to work and befriend the prince. On their first day of high school, Prompto succeeds and introduces him, and Noctis quickly accepts him not because of his amazing weight change, but because of his character. He had been the only person to see Noctis as something more than the prince that he is. (END SPOILERS!)

I see Prompto to be the most inspirational one of the group based on his episode alone. And I truly look forward to seeing his development in the game!

Gladiolus: Next up our list, we have the bulky and ~occasionally~ brash Gladiolus Amicitia, the man with the greatsword!

If Prompto is to be Noctis’s right-hand man, I would have to place Gladiolus as his shield. Gladiolus is actually the man that trained Noctis in his fighting skills, even when he was still in a prime of his own training, sworn through family birthright to protect the Caelum family. He is a free-talker and is often the one that keeps the group on track during their mission, but his direct nature tends to cause spats with Noctis due to their conflicting personalities.

Personally, I think that Gladiolus is probably the one that interested me the least of the four on the team initially, but I still adore his attitude nonetheless. His appearance gives me some reminiscence of Angeal Hewley from Crisis Core: Final Fantasy VII (my FAVORITE Final Fantasy game, by the way, but that’s a review for another day!), but far more rugged. And as much as I love Angeal, I feel that Gladiolus is almost his perfect contrast despite holding high positions in both of their fields. 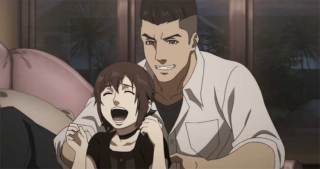 (SPOILERS AHOY!) In his episode, it is shown that Gladiolus not only has a younger sister that he protects, Iris, but that he actually seeks as a main goal to be the shield of King Regis rather than the young and sometimes gutless Noctis.

Iris longs to meet Noctis since they aren’t far off in age, and when she finally does have the chance, her childish nature kicks in and she chases a cat. Noctis ends up pursuing her when he sees her in time, and the two end up going on a mini-adventure of their own together. It’s a rather sweet event. But after the fact, the kingdom is going nuts looking for them, and Iris ends up crying when Gladiolus gets angry at her. But after seeing the noble and honorable nature that Noctis shows by putting the blame on himself for them both getting lost (and Noct getting grounded, whoo, go Regis, you are a good parent!) and coming back so late, Gladiolus decides to be more open-minded about shaping a relationship with him. (SPOILERS END!)

I think what I anticipate most about Gladiolus would have to be the way that he carries himself among the group, given that he’s probably (next to Ignis) the most serious without being too out of control. It’d be an interesting balance.

Ignis: Finally of the characters, we have Ignis Scientia, loyal servant of the Caelum family, dagger-wielder dynamo, world-class cook, and the only one with an incredibly hot accent. *Wink-wink-nudge-nudge*

Ignis is my favorite character released so far as a main character due to his mixture of a serious nature due to being one of the oldest of the group in tandem with his dark banter of joking. The fact that he can bind himself so closely with younger, more fun characters such as Prompto and Noctis and find common ground with someone as mixed up as Gladiolus, is almost admirable. But that’s not what strikes a chord in me about Ignis. Oh no. It has to definitely be the dialogue that he’s given, and how he is portrayed. It’s such a playful banter behind a serious tone. Which means that he’s unpredictable and cuts through the grain of his character archetype. He’s the stalwart soldier with glasses and cool demeanor, but he’s also fun, silly, likes to mess around with his friends, probably has a beer or two on the weekends with Gladio and shoots pong. I just… I love him so much.

On to his episode. It just shows his guidance towards our prince, acting as the right dagger to Noctis’s sword-hand strikes; swift, unexpected, clean-cut. In the times of crisis, Ignis is the one caring for Noctis during his high school days when he’s living away from the castle in an apartment. Noctis has no restraints on caring about his health, and in particular during this episode, asks Ignis to recreate a certain pastry that he had tried. All the while, chaos is unfolding from the shadows of the Lucis kingdom, and there is little that either of them are able to do to assist.

Ignis is the one that often acts as the voice of reason of the four, partially due to his age and experiences within the Caelum family. He is also the primary strategist, which holds heavy support over the group. And he is by far the one that I am the most curious about in the story. There has to be more to him than just that stalwart behavior. 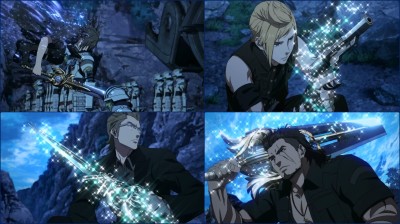 I personally thought that the animation quality of the characters was decent, suited the style of the show.
Obviously when placed next to the game, the graphics of XV are superior to Brotherhood by far.
I think that most of the animation budget may have gone towards the scenery and action scenes rather than the character designs. Though, I don’t feel that it takes away from the story in general. I still overall enjoyed watching everything.
Oh, and at one point, it gets all Kingdom Hearts-y. As in, Nomura and Tabata both have their fixations with characters falling through the water, through the air, etc.

I think that this is a good standalone anime in order to prep up the hype for Final Fantasy XV coming out on November 29th! Now it makes me feel prepared to jump into Kingsglaive!
I found that the pacing of the episodes was a bit… mundane for me after Prompto’s episode, but I still loved getting in-depth with the characters and learning more about how they came to grow alongside Noctis, how they met, and seeing them interact together in those short episodes.
I’d give the anime as a standalone a 6.8 out of 10, and round it up to 7!
Here’s to more reviews!

If you have review suggestions, you can email me at: shakyradunn.author@yahoo.com